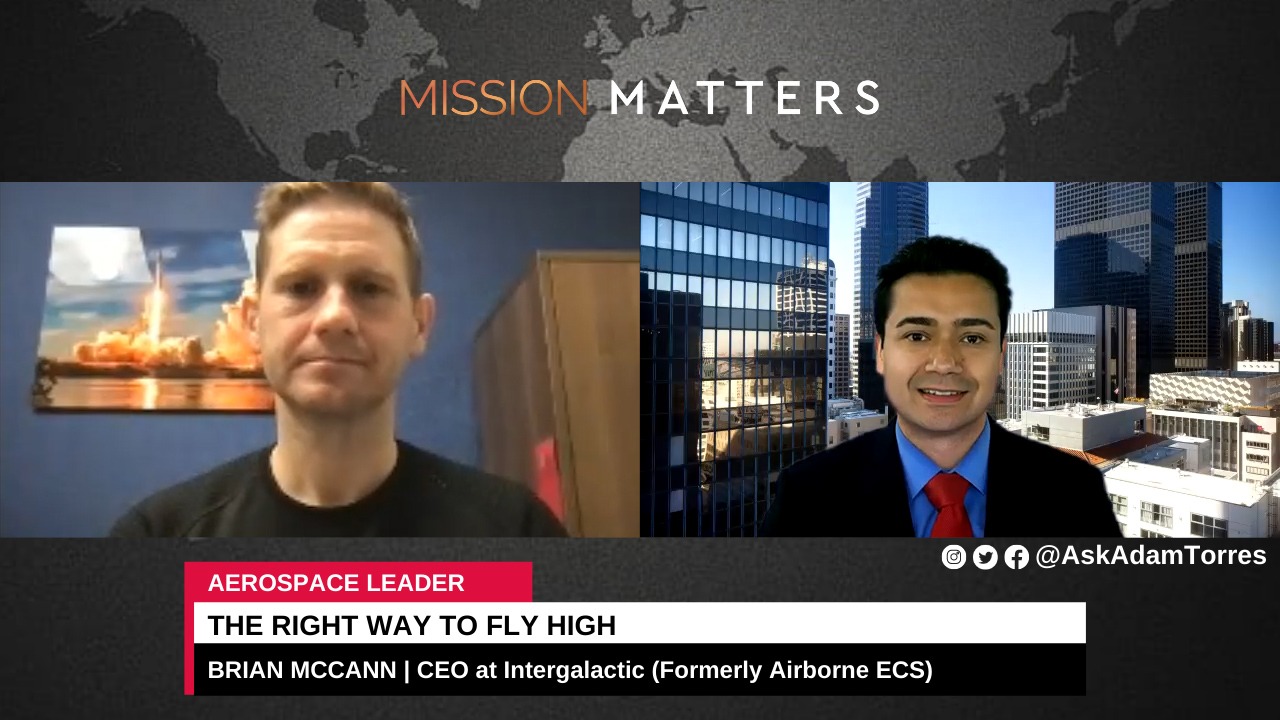 For Brian McCann, aerospace engineering is not just a job, it’s a legacy. The CEO of the prestigious aerospace company Intergalactic (formerly Airborne ECS) speaks to Adam Torres about the age of innovation in air travel and how private players are soaring to new heights.

Brian was introduced to the concept of air travel by his grandfather, who was an aerospace engineer. He had patents on rotary actuators and worked with companies that actively used his designs. Soon, Brian’s grandfather opened his own company in his garage. The company grew by leaps and bounds and continues to function strong after 45 years in service.

From the knowledge passed down from his grandfather and his experience in the aerospace industry, Brian has learned that innovation is imperative to furthering aerospace. In an industry that is limited by bureaucracy, he believes in working with people who are willing to break through the paradigms of previous generations.

A Change for the Better

Brian’s dedication to innovation is behind the recent decision to change the name of his company from Airborne ECS to Intergalactic. The change in the name shows the company’s will to push innovation forward through every move possible. The new name, Brian says, aptly summarizes the company’s vision of the future, where they will be part of missions that make space travel possible.

As a fully private company, Brian’s explains how Intergalactic’s outlook is different from government-funded NASA. “NASA’s policy is zero-risk and cost-cutting,” says Brian, noting how this approach has pushed aerospace back in time. He believes in following the likes of Elon Musk, whose innovation-first attitude opened doors to many private players invested in developing aerospace. Intergalactic has also seen success, with many organizations, including the military, deciding to check out their latest products.

Intergalactic specializes in thermal management–that is, handling heat in outer space. Brian laughs as he says how he explains his products as “really cool air conditioners” when he meets strangers. But the sophistication involved in designing and building the product that works best in outer space is no mere feat.

Explaining what makes products by Intergalactic different from others in the market, Brian dives into several engineering marvels that fit together to make a functional aircraft. He also notes that Intergalactic has developed its own designs for manufactured parts, allowing the company additional flexibility to manufacture those parts either internally or externally. This is rare in the aerospace industry, and allows Intergalactic to work at 400% greater efficiency than their competitors.

Hoping for aerospace to become a trillion-dollar industry in the coming decades, Brian signs off by saying that his company will continue to design products that will contribute to advanced heat management systems in every type of aircraft.

Brian McCann is the CEO of Intergalactic (previously known as Airborne ECS). He worked as Vice-President of Business Development at RAM Manufacturing company for six years and 13 years in total before becoming the CEO.

He managed all aspects of RAM’s business development from the supply chain to new and current product offerings, including estimating. He was also involved in the R&D and market analysis for new products. He is an expert negotiator at RAM’s long-term agreements with customers and suppliers.

Brian and his team can be reached out through the company’s website, https://airborneecs.com/. Brian can also be personally contacted through his email id, [email protected]