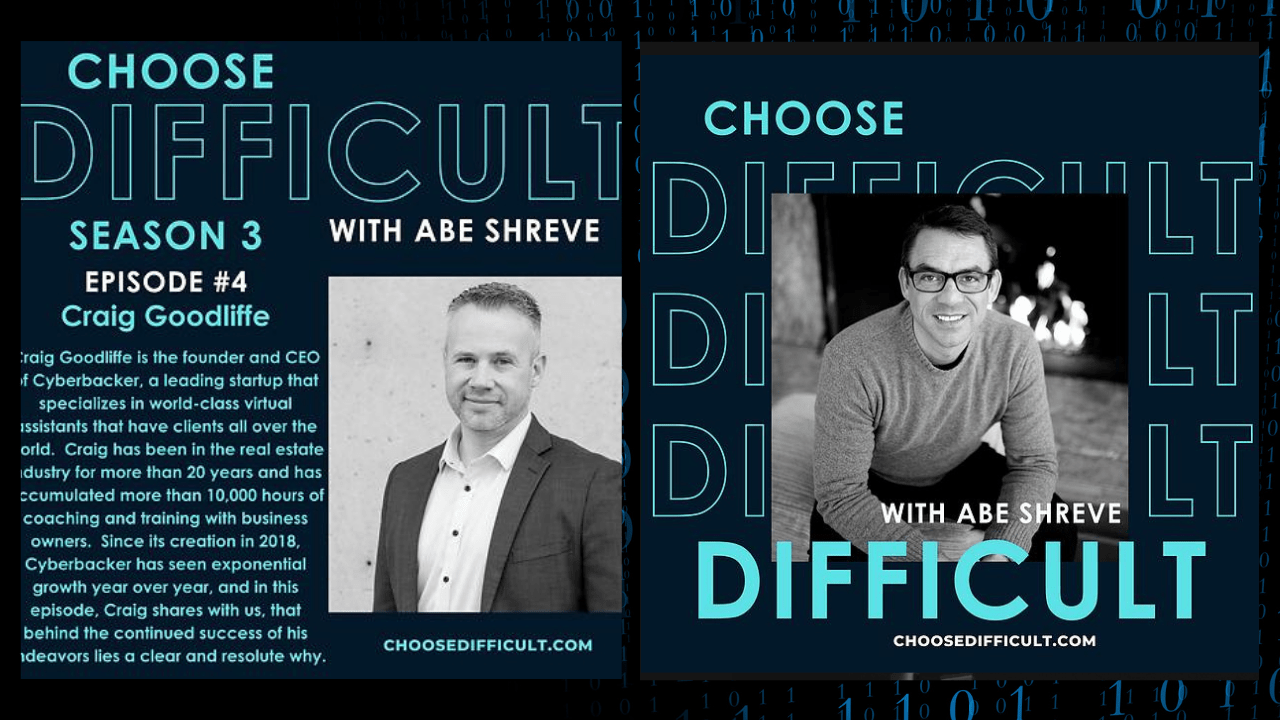 In this episode, Shreve and Goodliffe draw on their combined years of experience in real estate and coaching to communicate the importance of a mission-driven approach to business.

“I got my work ethic from my grandfather,” says Cyberbacker CEO Craig Goodliffe.

Decades before Goodliffe launched his successful company in 2018, he learned the importance of perseverance working “seven days a week, sun up to sun down.” An independent young person who discovered his drive to succeed and his knack for working with people early on, Goodliffe was able to purchase his first condo while working in retail at age 18.

Sales led him to real estate. Though Goodliffe was determined, the first years working on commission were tough. “I can remember driving home one night, and the car runs out of gas,” Goodliffe says. Despite feeling like he’d hit a low point, Goodliffe did not give up. He went on to meet Shreve, who would become a mentor and colleague, and build a successful real estate practice. Shreve says, “The day came when it was time for him to spread his wings and build his own empire.”

According to Shreve, Goodliffe is a great business owner and coach because “he understands that money can’t be the motivator. There’s got to be a bigger reason for why you’re going to do something because some days are gonna suck…and Craig has a big compelling why.”

Indeed, Goodliffe always asks his coaching clients, “why are you in business? What are you doing here?” Goodliffe’s answer? “Making a difference in the world. When you go to a lot of different countries and you see the scarcity and the need…it’s very different from what we grew up with,” he says. Goodliffe began to learn more about living and working conditions in the Philippines, where he decided to base Cyberbacker, a company that matches talented virtual assistants with primarily small businesses. Today, just three years after the company’s launch, Goodliffe oversees over 1900 associates.

Shiela Mie, President of Cyberbacker, helps listeners understand how much of a difference the company makes in the lives of its team members. After a recent typhoon, Cyberbacker helped employees replace computers and rebuild homes. She explains how Cyberbacker’s Cybercapital program makes it possible for associates to purchase their own cars and homes for the first time.

And the relationship is mutually beneficial. Goodliffe warns against the notion that “the U.S. has a lock on intelligence.” The coaches and business owners Goodliffe matches with “massively intelligent” cyberbackers are continually impressed by Goodliffe’s careful vetting process and supportive work environment. Many “CyberCEOs” say leveraging Cyberbacker’s virtual assistance has allowed them to take their careers to the next level.

“It’s incredible what he’s doing for his company, let alone the people who use his services,” Shreve says.

Craig Goodliffe is the founder and CEO of Cyberbacker. Cyberbacker’s goal is to match accomplished individuals to clients who share similar values and goals in order to optimize growth.

Abe Shreve is the CEO of Business MAPS Coaching and Training and the host of Choose Difficult, a podcast that explores visionary leadership and leaning into hard choices. Learn more at http://www.choosedifficult.com/.

Phil Nadeau: Being on set and in-sight
Jason ShuppDecember 7, 2022

Phil Nadeau: Being on set and in-sight

December 7, 2022
We use cookies on our website to give you the most relevant experience by remembering your preferences and repeat visits. By clicking “Accept All”, you consent to the use of ALL the cookies. However, you may visit "Cookie Settings" to provide a controlled consent.
Cookie SettingsAccept All
Manage consent