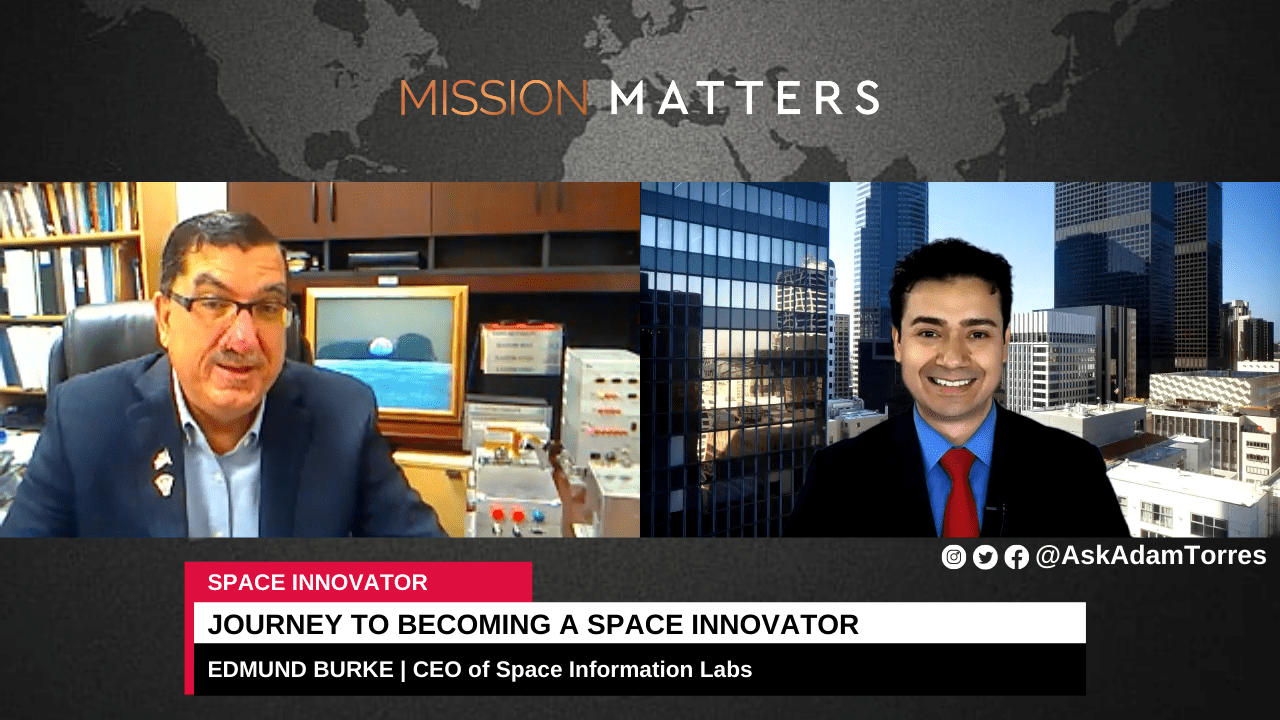 Edmund Burke Speaks About His Journey to Becoming a Space Innovator

After college, Edmund Burke was recruited to Vandenberg Air Force Base. With humble beginnings as a new recruit, Burke went up the ladder to become an Air Force Program Manager over 17 years. Burke recalls. “During that time, I had an idea to transform the space business. It started with the Vehicle Based Independent Tracking System (VBITS) technology, but that pulled me out from having a guaranteed paycheck for life to starting a small business.”

The blueprint for VBITS GPS Tracking, Autonomous Flight Termination System and Space-Based Range was first made in Burke’s garage. The United States Air Force used radar to track a rocket, terminated them with a man in the loop, looking at a screen with rocket trajectory, pressing a red button, and sending commands to the rocket. The rocket telemetry system sends high speed data to ground antennas to see what’s going on in a rocket.

“You eliminate a lot of the ground infrastructure. In every launch, you save at least a million dollars,” explains Burke. SIL’s Vehicle Based Independent Tracking System (VBITS) was first developed for MDA missiles (2006-2008) and ULA’s Atlas and Delta Rockets (2008-2011) for GPS tracking and has successfully flown many times without loss of GPS receiver lock for real-time range safety.

SIL has built many of these VBITS along the way, but the all-new model is stack modules with Faraday cages. “We are now working on VBITS Autonomous Flight Termination and Space Based Range System that can track, destroy, and send high-speed telemetry from a rocket and/or other aerospace platforms through Ka-band GEO and/or LEO satellites with no ground assets,” adds Burke.

“The first lithium-ion polymer cells first came out in 1998-2000. There’s very little electrolyte to leak, and I wanted to make sure to use this safer Li-Ion cell technology in a battery. We worked on intelligent power systems, and that led to having an advanced battery management system (BMS) built into the battery with overvoltage, undervoltage, short circuit and thermal protection, and automatic cell balancing functions within the battery. And it can display all the battery measurements with a Windows Graphical User Interface and Data Logger in real-time to the user to increase Li-Ion battery safety,” explained Burke.

BMS is at the heart of an intelligent battery management system for lithium batteries. It is user-friendly; an US Space Force Airman and/or Army Corporal with basic electrical training can operate the battery. The 52 amp hour Li-Ion Polymer Intelli-Pack battery will be on for NanoRacks Outpost mission flying on a SpaceX rocket. In June, this battery will power the Nanoracks spacecraft and high power metal cutting tool (2000 watts) simultaneously to demonstrate that second-stage rockets can be modified in space as commercial industrial outposts. This revolutionary new battery can power the spacecraft and high power payloads simultaneously and ensure safety. The spacecraft does not need too much power, but the high power metal cutting tool can draw up to 2000 watts more.

“We can also power other high power satellite payloads like SAR radars, Laser Comm, etc., and the current small satellite spacecraft batteries are not capable of providing this high power to a SAR radar which can draw over 5000 watts. You need an ultra high energy Li-Ion battery that can do that in a small volume, and SIL pioneered this new advanced technology that works in extreme rocket launching and space environments,” states Burke.

Chameleon 12U to 27U Nano/MicroSat Technology

“The reason behind its name is that a chameleon is totally adaptable. It can change colors, it can adapt to its environment. So, I decided to give it a bigger vision where 100 engineers could work on this new small satellite technology into the future as technology evolves.”

The Current Scenario of Education in the USA

Talking about the current debate about education, Burke states, “It’s really critical for our youth to get inspired to be part of the space industry or any type of engineering or science technology career.  We need more people studying science, engineering, and math. We’re definitely falling behind our competitor, China.”

Burke started a nonprofit organization called Endeavour Center 27 years ago, dedicated to STEM education for youth and teachers. “I always try to give back, and I think it’s the most important thing to empower a human being on this beautiful blue ball. We’re only here for a very short period of time. So, that’s what life’s all about –  giving back,” shares Burke.

With over 20 years of experience, Space Information Labs, an aerospace engineering business, has earned a strong reputation in the Aerospace industry for developing and integrating innovative, affordable, and high-performance avionics, Li-Ion battery, and nano/micro satellite products.

To know more about SIL, visit https://www.spaceinformationlabs.com/ or connect with Edmund Burke on LinkedIn.