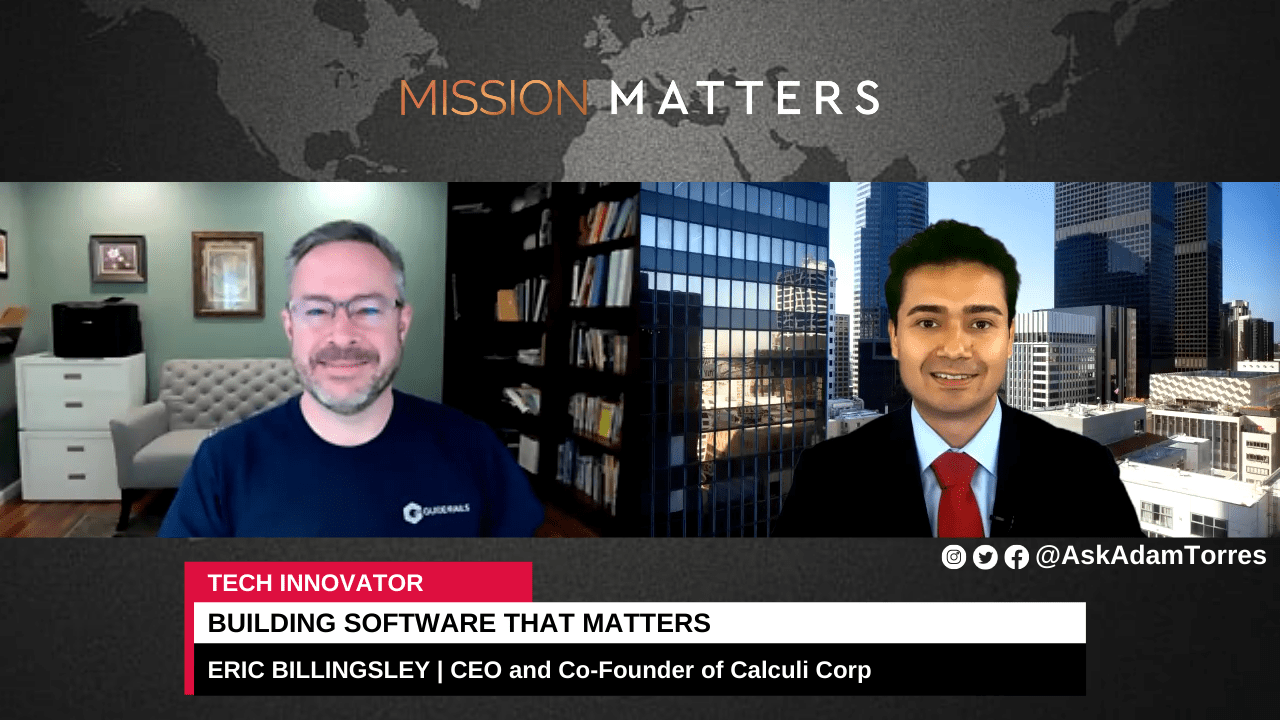 Eric Billingsley, CEO and Co-Founder of Calculi Corp, is interviewed on the Mission Matters Innovation Podcast by Adam Torres.

With decades of experience under his belt, Eric Billingsley’s mission is to break down the silos and bottlenecks that have crippled productivity in our most mission critical industries’ software delivery processes.

Playing in the Big Leagues

Eric Billingsley started his career by working with software giants such as AltaVista, eBay, Google, and Apple. During his time in those roles, he realized that no matter how big or small a company is, they face similar problems delivering features and innovation to their customers. Eric tells Adam that this shared problem drove him to create Guide-Rails, a platform for development organizations to drive innovation for their customers.

“It’s all about developing software that matters, with speed,” Eric tells Adam. The founders of Calculi realized that their vision should be about automating processes along the development chain that bottleneck delivery commitments to customers. A prerequisite for this solution is to provide complete visibility to the engineers’ overall software development stages and automating the tedious work of configuration and deployment.

Tearing Down the Red Tape

It will never be an easy process. Eric tells Adam that apart from technological limitations, bureaucracy also places too many hurdles. “Regulated companies, whether in banking or bio-tech, need audit trails. Since they deal with higher stakes, their risk appetite is low,” says Eric. This might boost profitability in the short term but decreases productivity due to a lack of space for innovation, he adds. Eric believes that a company needs to think differently and explore newer avenues to increase the speed at which products are delivered to customers.

“Did you know that in many companies, a software engineer spends only 20% of his or her time coding? The rest is just making sure that they adhere to compliance,” Eric says, speaking about the time and effort that can be freed to focus on innovation.

A Team Armed with Experience

Eric speaks highly of his team’s vision and dedication at Calculi that has brought exponential growth to the company. He talks about Basheer Janjua, the Chairman and Founder of Calculi, and Robert Boyd, the CTO, and their distinct set of skills that put the company on the world map. The two men bring years of experience working in multinational companies to start-ups. “Their experience helped drive a cultural revolution,” says Eric.

Armed with experience and a vision, they built the first commercially available end-to-end software delivery platform, Guide-Rails, a disruptive technology that helps organizations avoid time-consuming mistakes and quickly achieve the desired culture of speed with visibility and trust.

As Eric tells Adam with a smile, their ability to drive transformation is the secret sauce.

Before joining Calculi and creating Guide-Rails, Eric held technology leadership positions at Apple, Google, eBay, and AltaVista. As Apple’s Director of Internet Services Operations, Eric oversaw its transformation into one of the world’s best Internet service organizations. As Engineering Director at Google and in earlier positions with eBay and AltaVista, Eric helped the companies scale their infrastructure and produce world-changing innovation during exponential growth.
Eric and his team can be reached at guide-rails.io. You can also check out their LinkedIn page for more information.

A Life of Faith and Service with Andrea Jaeger
Kate LundFebruary 7, 2023

A Life of Faith and Service with Andrea Jaeger