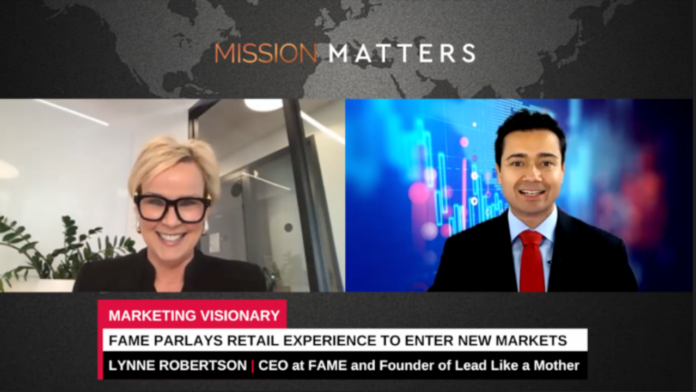 Below are experts from the interview:

How did you get started in your career and on this adventure?

I actually stumbled into this industry. I was a journalism major and I came into the market when it was pretty tight. I took a receptionist job at an advertising agency and my career grew from there. I fell in love with the business and the creativity and the storytelling aspect of it. Some of my journalistic tendencies were able to bloom there as well. I worked in agencies big and small. I landed at fame in the early 2000s and became president and CEO in 2004 and then ran the business for about 13 years. Then I purchased the agency FAME from the holding company Omnicom in 2015. We became a fully independent woman owned enterprise.

Tell us a little bit more about how you went from an employee to a business owner.

It’s one of those things where the transition occurs almost because you’re forced to change. Right? I had a great time managing the agency for all those years. Then the landscape changed in terms of how holding companies worked with agencies and it became less desirable. I mean, I had a lot of, if not all of the responsibility but the empowerment part of it was starting to erode. It got to the point where I needed to make a pretty substantial change in my career trajectory. I wanted it to stay at fame, but not in the same capacity. I went to my friends in New York and I talked to them about an exit plan or succession plan or an acquisition plan. We got into a negotiation for the acquisition on my part that took about a year and a half. Holding companies really aren’t in the business of divestment, they are in the business of acquisition. Then we got the deal done and I became fully responsible for everything.

Why did you choose to take the retail experience that FAME was known for and expand into new markets?

That’s where we grew up, with blue chip retailers, like Target and Best Buy. We did a lot of tremendous work over the years for blue chip retailers. As the retail landscape changed exponentially with the onset of online retail we had to translate our skills, not only from brick and mortar to digital, but into other categories because the work that we were doing was drawing up. We needed to create new revenue streams. We needed to, you know, export our expertise to different categories in order to grow. We spent some time right after the acquisition really defining what made us different, how retail mattered in other categories. It really drilled down to that notion of “what’s next.” That’s really, our core competency is defining that. And it’s because we grew up in retail.

In retail, if it’s not working, we just clearance it out and we’d put something new on the shelf. It’s in constant evolution to new product launches, new promotions, new activations. We were always on that sort of fast treadmill of “what’s next.” We defined that as kind of our core creative philosophy and then said, well, what else about that is interesting to other people? What else makes us unique? There is a design centricity to our creative approach. Again, going back to our retail roots, that’s important because everything talks. There is a mandate to really pay attention to those finite details. There’s a design centricity to that which is unique to us. I think it’s important, especially as we’re translating brands into different channels, we have to understand what those frequencies are. We have to understand how the tone and the look and feel of that brand speaks in those channels.

FAME began as the retail arm of a general agency in 1991 – making us sharp, nimble and preemptive thinkers. While retail has shaped us, it no longer defines us. Today, we continue to help brands anticipate what’s next on a broader level. Grounded in strategic insight, and guided by emerging trends and cultural cues, we help brands discover what they have that people want most. And express it in a way that only they can.

Lynne Robertson, CEO and Owner at FAME, is a proven industry force and frequent speaker, Lynne captured the attention of the industry when she purchased Fame from its global holding company in 2015, shedding the traditional agency model for a renewed focus on being done with what’s been done. An AdFed Silver recipient, Effie winner, member of The Hub Braintrust, honorary AdFed Board member and VP of the Twin Cities Retail Design Institute, she is wholeheartedly committed to choreographing brand experiences that consumers love to love.

How to Have a Backup Plan with Evan Samet

The Art of Leveling Up: Using Balance, Creativity, and Discipline to Improve in Business and Life with Tony Zorc