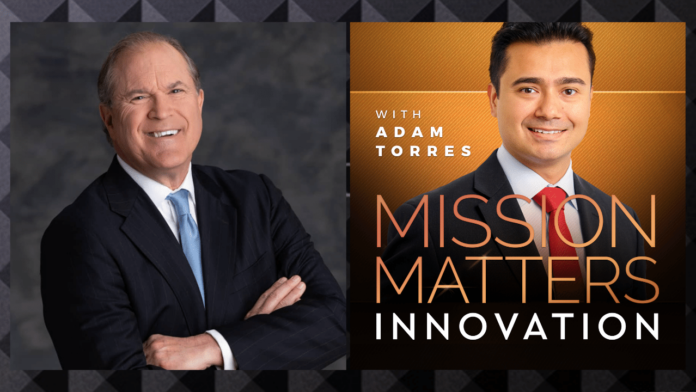 New book alert! In this episode,  Adam Torres and Dan Pelino, Co-Founder and President at Everyone Matters and Author of Trusted Healers: Dr. Paul Grundy and the Global Healthcare Crusade, explore Dan’s book and views on healthcare.

Author of ‘Trusted Healers’ and a leading advocate for a system of care with a strengthened approach to primary care, including mental and behavioral health, Dan is an innovator, thought leader and author. He is co-founder of Everyone Matters, Inc., a social impact enterprise dedicated to ensuring that everyone has the right to dignity and respect, to be who they are without being shamed or demeaned, and to thrive within their own unique individuality. He is a regular contributor to the discussions on healthcare, citizen based services and smarter cities having appeared on Dr. Oz, CNN, Bloomberg, the BBC and other global media outlets.

He has testified to Congress on the Affordable Care Act and presented to The White House Commission on Healthcare. In 2014, he accompanied Secretary of Commerce Penny Pritzker on her first United States trade mission to Mexico to pursue opportunities for economic development and the advancement of shared practices with the Mexican national and regional governments. He along with Dr. Paul Grundy in 2012, were awarded the NCQA award for leading the national efforts on healthcare quality and value. He received the National Corporate Global Education Award in 2014 for his work on the advancement of quality based education.

He is an adjunct professor at his alma mater Western Kentucky University lecturing on applied leadership. He serves as an independent director to the Itron Board of Directors as well as a board member and advisor to other private and public companies. He is a member of the National Association of Corporate Directors. Dan worked for IBM for 36 years concluding his career as IBM’s senior executive and General Manager IBM’s Global Healthcare, Life Sciences, Education, Government and Smarter Cities business. He received his undergraduate and graduate degrees from Western Kentucky University. He and Anne live in Northern Virginia with their dog Surrey.

Everyone Matters is a big-tent dignity, diversity and empowerment campaign launched in 2012, advocating for everyone’s right to dignity and respect, to thrive in their own unique individuality, and ultimately the right to be who they are, whatever their race, ethnicity, socioeconomic status, sexual orientation, gender, age, bodily ability. 50 Mayors from the U.S., Canada and globally have participated in our annual milestone day, along with more than 100 schools, who engage in year-round activities focused on acceptance, diversity and pride-in-identity. Mayors issue public statements, involve City Hall, and visit schools and community centers to deliver a message that EACH PERSON matters.

Global leaders supporting the campaign – each penning a brief statement of pride-of-identity and acceptance, include  Sir Paul McCartney, His Holiness the Dalai Lama, Tom Brokaw, General Colin Powell, Hugh Jackman, Ellen DeGeneres, George Clooney, Archbishop Desmond Tutu, Kevin Spacey and others. The power of Everyone Matters is the positive focus on acceptance and self-acceptance, through its concurrent core messages and engagements:  allowing OTHERS to be who they are, and embracing OURSELVES as we are.

Innovation and the Future of Student Success: Lessons from Dr. Kevin Kruger

Phillip Naples and His Journey of Transforming the Traditional Insurance Industry