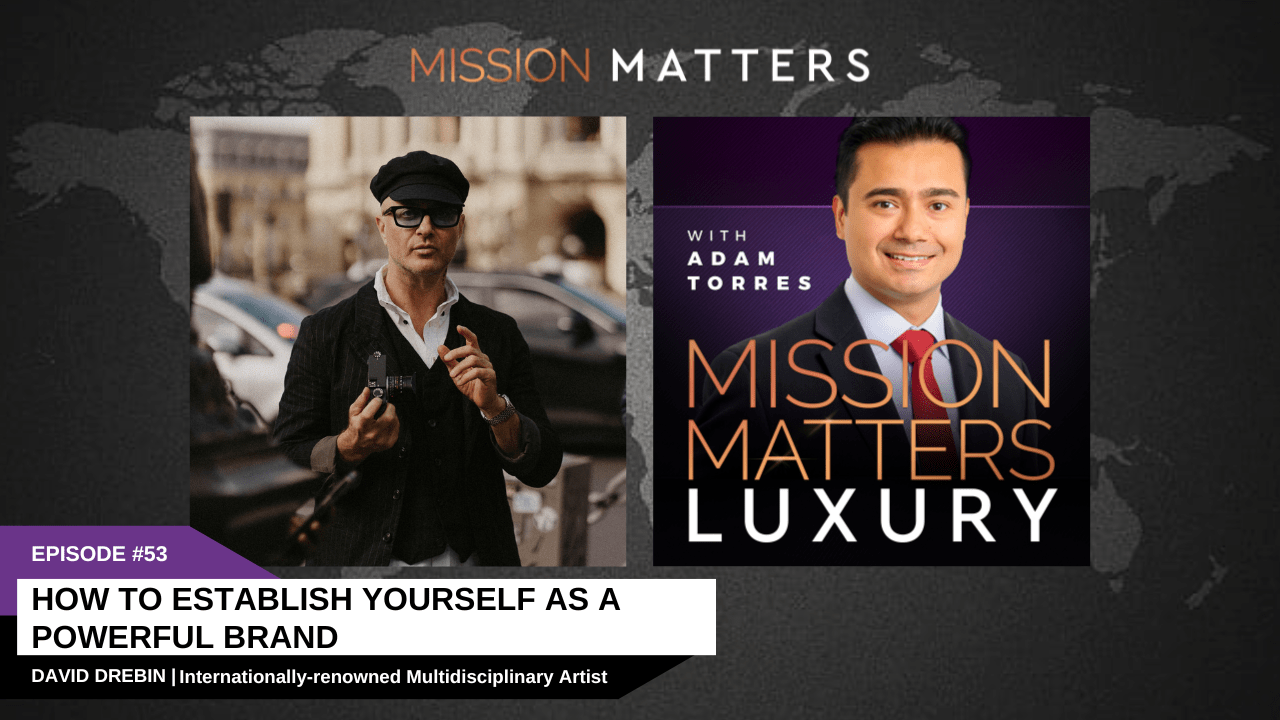 How to Establish Yourself as a Powerful Brand

David is best known for his limited edition artworks, which have been exhibited in some of the world’s most prestigious galleries. In this episode,  Adam Torres and David Drebin, Internationally-renowned Multidisciplinary Artist, explore David’s life, work and what it takes to build a powerful brand.

In 2005, Drebin had his first solo exhibition at Camera Work in Berlin. This was followed by his first illustrated book entitled “Love and Other Stories”.

Drebin’s photographs are epic, dramatic, and, above all, cinematic and have been collected around the world. In a unique and opulent way, Drebin stages femme fatales against the gigantic backdrops of cities such as Hong Kong, New York, and Paris. The panorama of the big cities, which, due to their format, are a tribute to cinema, serve as cinematic settings. With their impressive skyscrapers, they provide the viewer with a nearly infinite surface for the imagination. The distinctive tension and depth in his pictures arise from the free combination of such differing topics as humor and sex, melancholy and sex, and melancholy and humour.

At Art Miami in 2010, his now sold out “Central Park” sold for a record price of $78,000 through Contessa Gallery who has featured Drebin in major Art Fairs since 2008 alongside art world legends Andy Warhol, Chuck Close and Helmut Newton.

Exclusively publishing books with ( www.teNeues.com ), his books are distributed around the world and often followed with exhibitions in Paris, New York, Miami, Istanbul, Amsterdam, Brussels and many other cities Internationally.

Drebin has been showcased during Art Basel at Art Miami by Contessa Gallery for over a decade and is also represented by the world’s finest Art Galleries including Camera Work in Berlin, Galerie de Bellefeuille in Montreal, Art Angels Gallery in Los Angeles, Preiss Fine Arts in Vienna, Immagis Gallery in Munich and Fahey Klein in Los Angeles.

In 2018 the record price of a David Drebin photograph “Jerusalem” sold for $100,000 through Art Angels Gallery in Los Angeles.”

TeNeues published ( www.teNeues.com ) Drebin’s books “The Morning After”, Beautiful Disasters”, “Chasing Paradise”, “Dreamscapes”, “Love and Lights” and “Before They Were Famous”.

Find Your Passion And Make A Career Out Of It with Azhelle Wade
Ken EslickFebruary 7, 2023

Reflections on life and Tennis with Andrea Jaeger
Kate LundFebruary 7, 2023