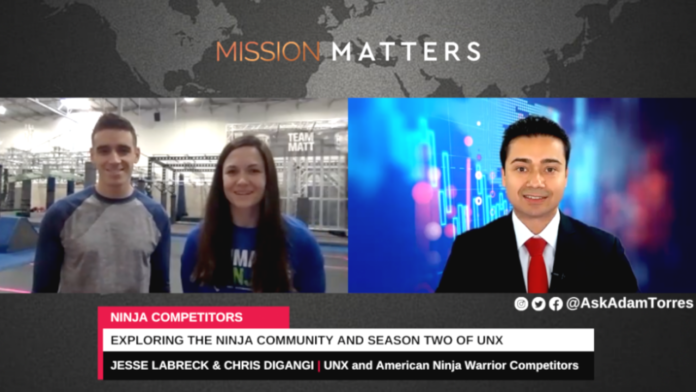 In this two-part in-depth interview, Labreck and DiGangi tell the story of what it’s like to be involved in the Ninja community, while Piejak gives insight into the business side of Obstacle Course Racing’s (OCR) ]rapid rise in popularity.

“In 2016, I went to a gym where they had people from American Ninja Warrior, and that was my start. Coming from a track background, I was used to having a team around me. A couple of years after college, I didn’t have that until I went to this first competition. You make all these friends in just a couple hours and do all these fun challenges. When I discovered the community and the obstacles courses and challenges, I was hooked,” says Jesse Labreck.

DiGangi tells the story of the first season of UNX and plans for a second season of competition along with the overall goal to broaden the playing field for OCR competitors.

According to DiGangi, “The goal with UNX is to create a league that allows competitors from gyms around the country to have an outlet to compete with the best of the best. To have a season of Ninja where viewers can follow their favorite athletes and track points and standings, with it all culminating into a big championship at the end of the season providing a year-round experience.”

Piejak explores the future potential of OCR and the success of gyms sprouting up around the country, providing a positive, family-friendly environment for entertainment and life skills development.

“We were looking at different business models in the kids space, and as a parent, it was important for us to start something that would include our kids. Our entire family were fans of American Ninja Warrior. It’s rare for the whole family to all get excited about the same show. Ultimately, this love for OCR and the show was what led to us launching Ultimate Ninjas and UNX,” says Jeff Piejak.

This in-depth two-part interview provides insight into the Ninja community and how OCR’s business and sport are rapidly expanding.

UNX is the worldwide leader in the newest segment of the OCR sport. Recently partnered with Whistle TV, the network streams UNX men’s and women’s pro tour and championship. Ultimate Ninjas and ULTIFIT are market leaders in the emerging OCR fitness category.

Ultimate Ninjas was Inspired by the hit television show American Ninja Warrior on NBC, Ultimate Ninjas offers a wide variety of obstacle courses for kids and adults of every age and skill level.