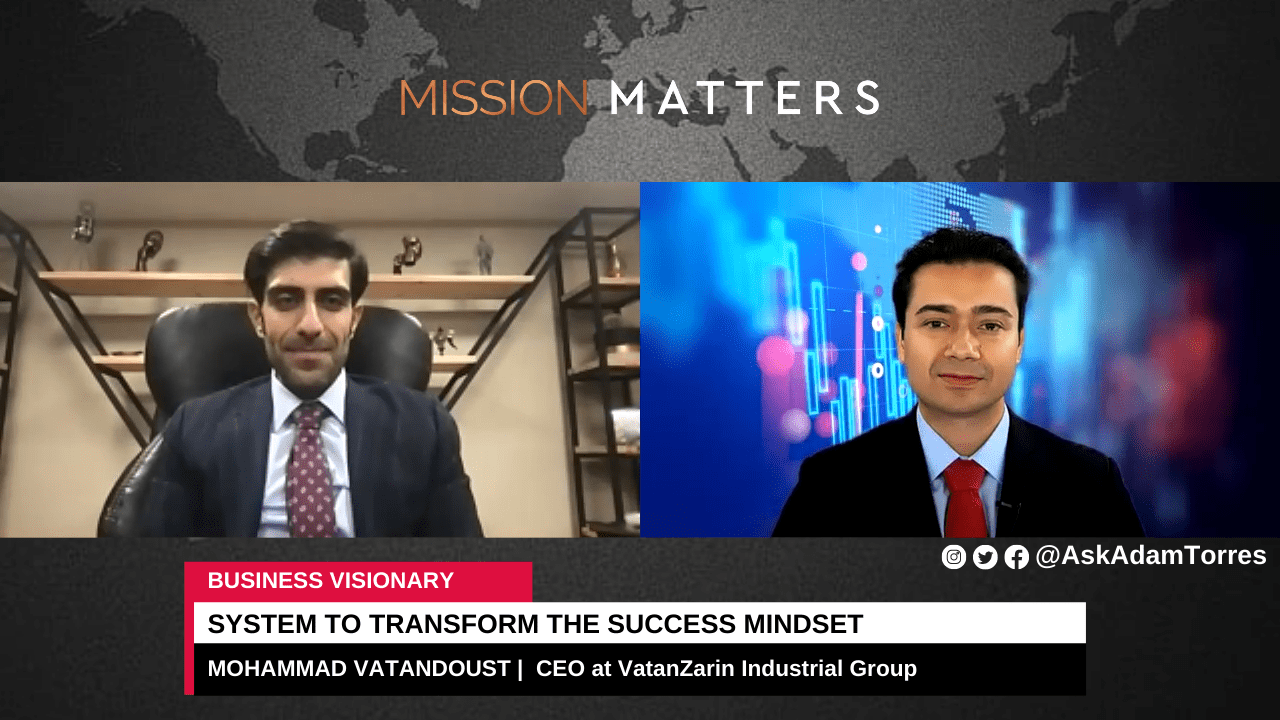 Mohammad Vatandoust Devises a System to Transform the Success Mindset

In an interview with Adam Torres, Mohammad Vatandoust discusses his first big break into the world of business as the owner of a gas station and a restaurant, the subsequent financial shock that changed his perspective toward life, and his comeback.

Mohammad Vatandoust started working by getting a job at a gas station at the age of 16, as a way to carve out his own path in the world. He turned this entry-level job into a huge opportunity when he increased the revenue of the gas station by 15 to 20 percent when its owner left him in charge.

“Next, I went ahead and bought a restaurant,” says Mohammad. His rise continued when his business did so well that he managed to sell it for $300,000. “At that time, I was also studying at university, so it became tough for me to manage both,” Mohammad tells Adam.

But things took a downturn for him around 2007-2008 when the economy took a hit.

Mohammad invested around one million dollars into buying a gas station, but due to various reasons that included the economy on the downward spiral, he lost most of his investment and almost went bankrupt.

Not surprisingly, when Adam asks him about what is the most important lesson that young entrepreneurs should keep in mind, Mohammad says, “Always surround yourself with people you can trust 100 percent and always double-check and triple-check every document before you sign.”

Providing more valuable advice that helped him come out of the darkest period of his life, Mohammad continues, “Have faith regardless of what happens to you, especially when it comes to circumstances that are not in your control, like the present pandemic and the lockdown it has created. If there is one thing that I truly learned it is to never give up, never blame oneself, and always learn to adapt to rise above the situation.”

Thankfully for Mohammad, his family supported him in his time of need. But that meant that he had to start all over again after the age of 24.

“It started with humbling myself by going back to the family. When we are in our 20s, our mentality is that we think we know things but that is usually not the case. Our methodology is not perfect and we get to know this later. So, when I went back to my family, my father asked me to start from scratch. I went into the family business back in the Middle East and I had to start from an entry-level position,” says Mohammad.

Mohammad worked various jobs in his father’s factory as an electrician, security guard, driver, and more before he could climb up the ladder and take over the business as its CEO when his father retired four years later. “I was the youngest person on the board,” says Mohammad with a sense of keen accomplishment.

All those experiences helped Mohammad devise a tenet that he believes will transform lives.

The RIM system, as Mohammad calls it, is about learning to control the power of the mind to achieve success.

“RIM stands for Routine, Imagination, and Mediation. Routine is a double-edged sword. A good routine can make you and a bad routine will break you by instilling bad habits. Understanding what is a good routine and what’s a bad one is one of the key elements of success. Imagination is what differentiates humans from animals. But imagination should be applied the right way, as imagining dreams that are achievable will set you on the right routine and vice versa,” advises Mohammad.

“The superglue that binds routine and imagination is meditation. Many people ignore developing the mental aspects of our lives even though we are aware of its importance. Meditation helps one understand our mental capacity, improve our imagination, and set us on the right routine,” says Mohammad, closing out the podcast with a valuable set of advice.

Mohammad Vatandoust, apart from being an entrepreneur and CEO of VatanZarin Industrial Group, is also an accomplished motivational speaker. He believes in creating an environment that nurtures the nature of those who need it the most. After returning to Iran to take over his father’s business, he invested in job creation and the production and transfer of his success to the next generations.