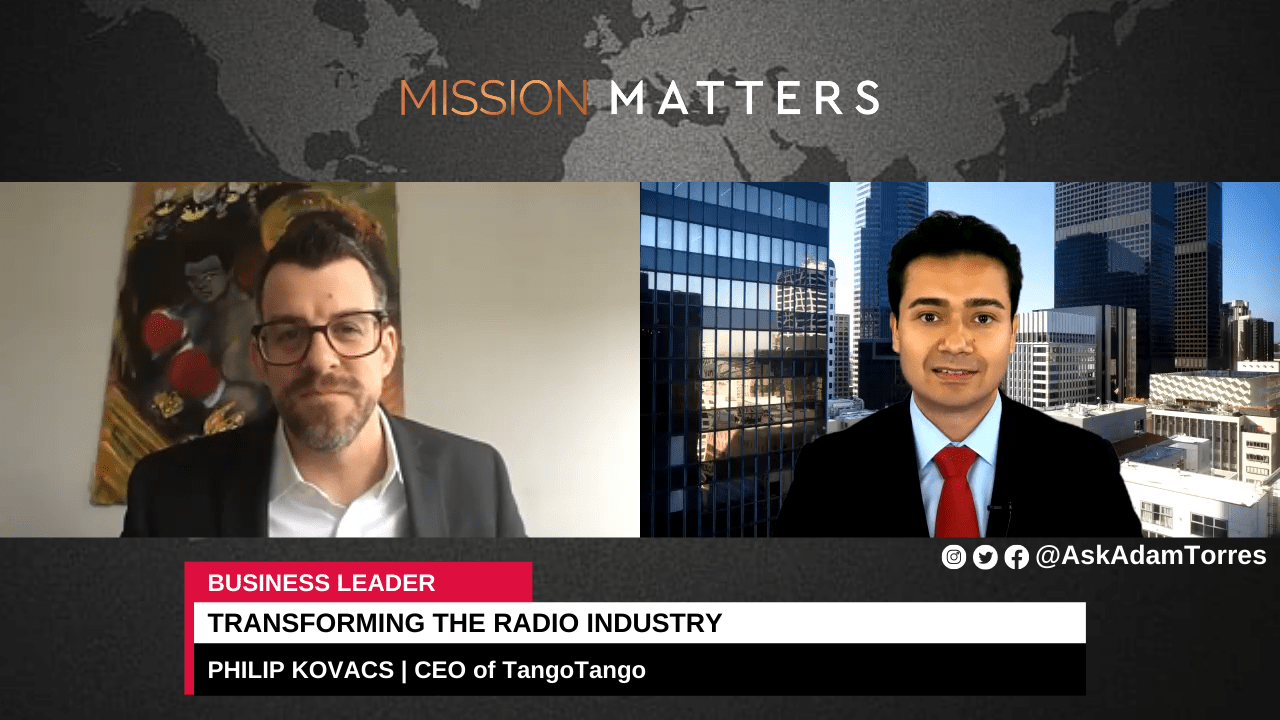 Philip Kovacs and His Journey of Transforming the Radio Industry

Philip Kovacs, CEO of TangoTango, was interviewed on the Mission Matters Business Podcast by Adam Torres.

Success comes to those who strive to step out of their comfort zones, and that’s exactly what Dr. Philip Kovacs, CEO at TangoTango, proved through his astounding journey in the radio industry. In this extensive interview, Philip explains dealing with challenges that come with being an entrepreneur and the qualities needed in the process.

In the early days of his career, Philip was acing his role as a high school teacher before transitioning to becoming a college professor. It was when Philip was comfortably positioned as tenured faculty that he decided to upend his career path and work at a startup. Recalling this decisive phase of his life, Kovacs states, “Leaving tenure was one of the best decisions I’ve made.”

Crediting his short attention span, Philip shares how his career shift gave him an opportunity to reinvent himself. In the words of Philip, if you are not happy where you are, take a risk and consider changing.

After achieving unprecedented growth at the startup, Philip went on to work with TangoTango as a consultant in 2018. Joining a dedicated team, they accomplished phenomenal success, and he was asked to become its CEO in August 2019.

Startup versus the Traditional Job

Discussing his transition from the startup culture and moving into the traditional job sphere, Philip highlights the significant differences between them. He suggests that while traditional jobs offer demarcated roles and job profiles, startups stringently ignore job titles and focus solely on the work requirements.

Philip shares how most “traditional” corporate jobs have defined responsibilities, whereas at new startups, one is expected to work wherever he is needed.

One of TangoTango’s early challenges was a “trust issue” with the vigilant first-responders who were their target customers. There were days when the sales were quick and others when sales were drawn out. With an integrated system over the cloud, TangoTango reassured prospects that they were not replacing the customer’s original radios but instead were aiming to augment their existing systems.

Assisting people with the interoperability issue, geographical barriers, and chances of missing calls for help, TangoTango presented a problem-solving model for getting limitless radio for public safety.

Covid lockdowns presented a two-sided situation for the company, with losses and gains on different fronts. Talking about the pandemic, Philip shares, “When there are doors shutting in one place, there is always something opening in another.”

While already exploring utility and logistics companies, Philip reveals his plans for scaling the business model. Putting fuel to the fire, TangoTango is available in 44 states, and is looking for sales representatives nationwide.

TangoTango has been securely connecting radio systems to the Internet since 2016. While they began their mission dedicated to serving first responders, they have recently started assisting schools, utility companies, security companies, and other businesses in the logistics industry.

To learn more about the organization or inquire about the hiring process, visit TangoTango and get in touch!

Living by Design: A Blueprint for Business from Idea to Angel
Adam TorresJanuary 31, 2023

The Human Side of Leadership with Captain Sandy Yawn
Kate LundJanuary 31, 2023

The Future of Service is Financial Freedom
Jonathan ShroyerJanuary 31, 2023

The Five Love Language for Employees: Treating People as Human beings not Human Doings in the Workplace
Denley McIntoshJanuary 31, 2023

How To Build Winning Teams with Andrew Sillitoe
Ken EslickJanuary 31, 2023

Living by Design: A Blueprint for Business from Idea to Angel

The Human Side of Leadership with Captain Sandy Yawn

January 31, 2023
We use cookies on our website to give you the most relevant experience by remembering your preferences and repeat visits. By clicking “Accept All”, you consent to the use of ALL the cookies. However, you may visit "Cookie Settings" to provide a controlled consent.
Cookie SettingsAccept All
Manage consent