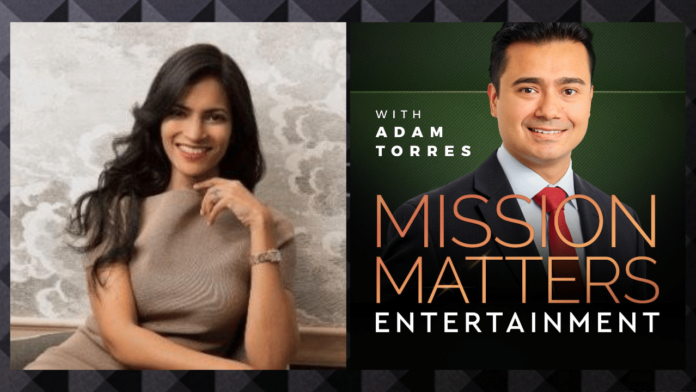 New show alert! In this episode,  Adam Torres and Rita Kakati-Shah, Founder and CEO of Uma, explore The Uma Show, through the Indian TV channel, Mana TV International, which has had a phenomenal impact in empowering and uplifting the voices of South Asian women around the world.

Rita Kakati-Shah is an award-winning, gender, diversity, inclusion and career strategist, speaker and advisor to Fortune 500 companies. She is the Founder and CEO of Uma, an international platform that partners with organizations to attract, retain and develop women and minorities in the workforce. Prior to Uma, Rita lead Business Development globally in CNS healthcare. Rita began her professional career at Goldman Sachs in London, where she was awarded the prestigious Excellence in Citizenship and Diversity Award. She is also the recipient of the King’s College London Distinguished Alumni Award in recognition of her outstanding professional achievement, civic leadership and service to her alma mater. Rita is also the triple Stevie Awards for Women in Business winner in recognition of her global leadership, entrepreneurship and services to business.

Rita is a graduate of King’s Business School, and actively involved with the King’s Leadership Mentoring program, Diversity Mentoring Program, Entrepreneurial Institute and is also a member of the New York and Los Angeles Alumni Committees. She is also a LeanIn USC Mentor and also mentors women veterans and military spouses, survivors of domestic violence, women in technology and STEM, schoolgirls and university students. Rita also served on the Women in Legal Profession Committee of the New York City Bar Association, Co-Chairs the Working Moms of the J at the JCC of Manhattan, is an ACP Women Veteran’s Founding Circle member in the US, Governing Board member of Ormiston Park Academy in the UK and an Oversees Ambassador to the London Bihu Committee.

Rita has been featured as an expert on multiple international television and news shows, interviewed and quoted in various podcasts and publications such as the Wall Street Journal, Fast Company, Thrive Global, Dell Technology, PRWeek and iHeartRadio. Rita also hosts the popular South Asian television show, The Uma Show, on Mana TV International.

Too many smart, talented women who left the workforce to raise children are unable to find jobs that match their credentials and lifestyle commitments when they try to return. Not enough is being done to retain, retrain or re-engage this fundamental talent pool. Companies that once hired and trained these incredible women now suffer from an intense loss of headcount and huge drain of hiring and training resources, too.

At Uma, they challenge the status quo, they break with the mold, they work with like-minded employers to create opportunities that match the credentials and lifestyle goals of these powerful women. In Sanskrit, the Hindu Goddess Uma is a daughter, a mother, a sibling and a wife. She represents strength, courage and confidence. She is the Goddess of Go-Getting! At Uma, they empower women to re-enter the workforce through networking events, workshops and Umaship placements. Headquartered in New York, with presence in London, Los Angeles, the San Francisco Bay Area and Toronto.

Author Ronit Plank Releases When She Comes Back: A Memoir