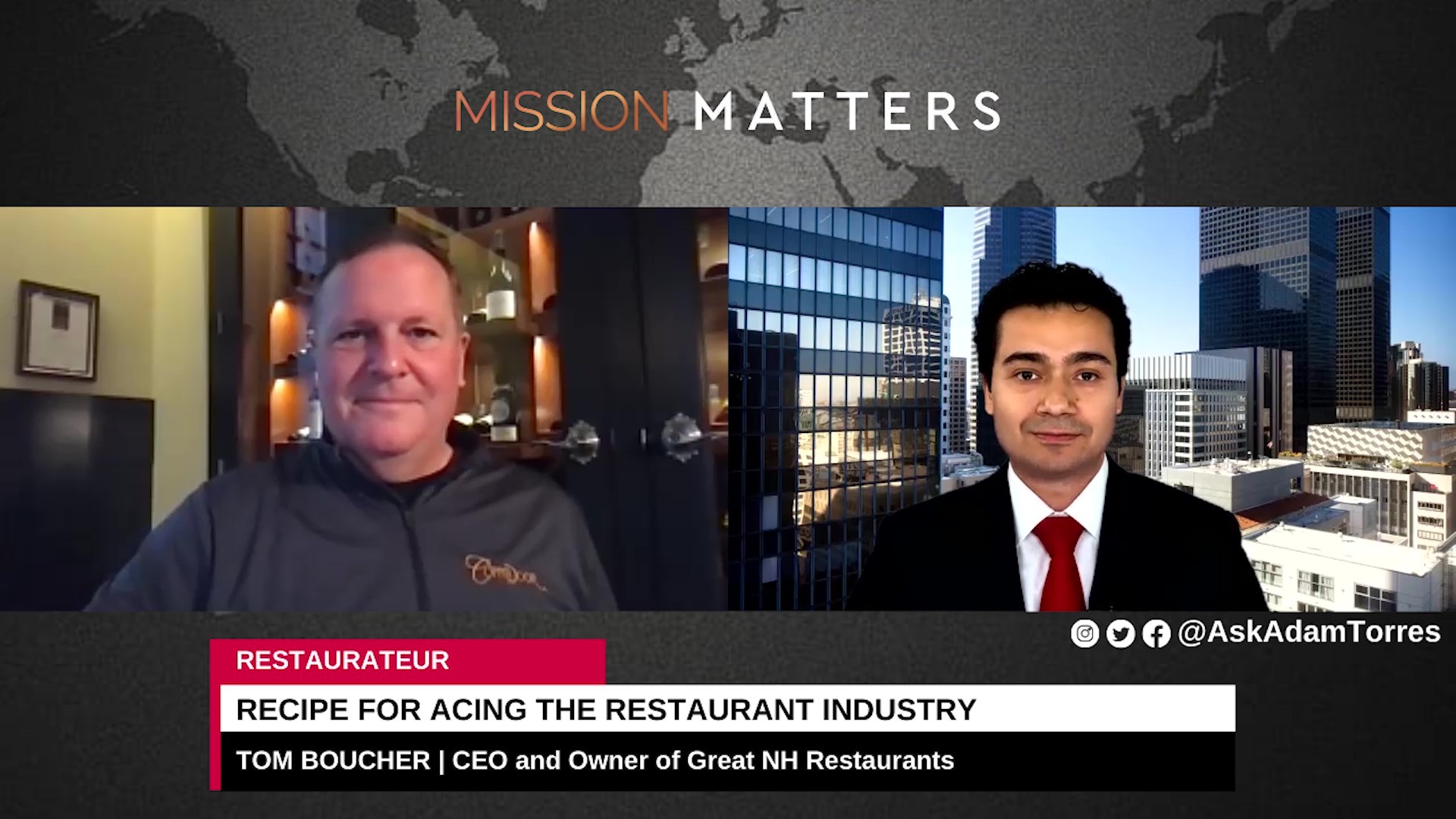 Tom Boucher and His Recipe For Acing the Restaurant Industry

Tom Boucher, CEO and Owner of Great NH Restaurants, shares his journey from chemistry student to becoming one of the most successful restaurant owners in the United States. “It all actually happened by accident,” exclaims Boucher. With no relevant background or prior experience, Tom was solely led by his zeal and passion to get to where he is today.

Changing the Course of Life

When studying chemistry in college in the 80s, Tom couldn’t envision himself having a life-long career in it. After starting a master’s degree program in chemistry, some soul-searching resulted in him leaving it behind and waiting tables at T-BONES Great American Eatery while figuring out what to do next. He quickly became a manager and then General Manager, growing to love his new career.

His responsibilities and managerial positions grew each year. In 1995, at 29-years-old, Tom and the three original founders of T-BONES opened a new concept, “Cactus Jacks,” which provided an upbeat Southwestern cuisine to its customers and became another rousing success. In 2004, Tom became the CEO of the entire company which at the time consisted of 4 T-BONES and Cactus Jack’s.

Tom and one of the three founding owners, Mark Fenske, bought out the other two founders in 2008, resulting in full ownership. Reminiscing that day, he shares, “It was New Year’s Day, sunny but brisk, and I remember coming out of the closing and the thinking: I did it!”

In the spring of 2008, the great recession was in full swing and Tom chose to go against set spending standards and invested more in marketing and promotions to keep the restaurants busy and staff earning good wages. His strategy paid off and the business continued to grow. Tom and his partners opened Copper Door Restaurant in 2011, a second location in 2018 and a 6th T-BONES in 2020, now under the umbrella of Great NH Restaurants, Inc., created in 2008.

Talking about their continual success, Tom credits it to the constant support and understanding of their loyal employees who share his spirit and passion. “Although each concept has its own menu, unique feel and atmosphere, they are all operated with the same systems, controls but. more importantly, culture.”

Tom also shares how he and his partners set their employees up for success, once saying, “Our 20-year managers have earned four vacation weeks a year, which is substantial. Most companies don’t do that. This is a career for them. They make a good salary, they have profit-sharing plans, great vacation plans, health insurance and even a possibility to become an owner within the company. We do a lot of the things you would see in a big business, but we’re applying it here in the restaurant world.”

In 2014, Great NH Restaurants, Inc. launched FeedNH.org, a non-profit organization dedicated to providing funding, food, and volunteer services to meet the needs of NH-based non-profits benefiting families, the elderly, education, and the disadvantaged.

Focusing on the younger generation, Tom offered a piece of advice. “People going to college, should not stress about what they are going to major in,” says Tom. Laying supreme emphasis on skills and abilities, he believes that going to college isn’t always required for excelling in life. Tom also strongly advises extensive networking.

Tom is convinced that creating a great corporate culture and imbibing its true essence helps anyone achieve long-lasting success. With the spirit of starting from the bottom, Great NH restaurants promotes from within at every level. In fact, all 100 managers in the company started in an hourly position with either T-BONES, Copper Door, Cactus Jack’s or CJ’s.

Great NH Restaurants, Inc. was established in 2008, dedicated to managing its family of brands, including T-BONES, Cactus Jack’s, CJs, Copper Door Restaurant, and more. To learn more about the brand, visit https://www.greatnhrestaurants.com/

Mission Matters: How do you Foster Innovation in your Company?
Adam TorresDecember 5, 2022

To Leverage or Not to Leverage-Common Types of Debt
Robert WolfDecember 1, 2022

The Slippery Slope of Hope and Why You Want to Know about It!
Ken GoldbergDecember 1, 2022

Getting Your Credit, Where It’s Due Part 2
Le'Keisha MazurDecember 1, 2022

Mission Matters: How do you Foster Innovation in your Company?

Testing and Optimization for Small Businesses

December 2, 2022
We use cookies on our website to give you the most relevant experience by remembering your preferences and repeat visits. By clicking “Accept All”, you consent to the use of ALL the cookies. However, you may visit "Cookie Settings" to provide a controlled consent.
Cookie SettingsAccept All
Manage consent